Did you know that 95% of British people buy goods via internet retailers?

Ninjago is one LEGO’s hottest lines right now. It’s wide range of sets give everyone something they can afford, like this small booster set.

Bytar is one of the smaller enemies found in the Ninjago world. Lloyd Garmadon makes up another of the small options. If you like small minifigures and the spinner game then this set is for you.

There is also a moderate amount of interesting colored elements. For example, the small black chains usually only come one copy in a set. This set has three of them. It’s also very affordable for those who may not be entirely into the Ninjago spinner line. The following is a full breakdown of the set. 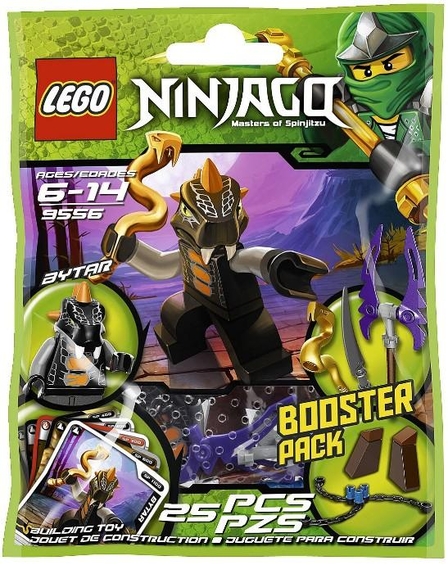 Weapons in the Set

One of the simplest weapons is a pearl gold snake. The next simple weapon is a scythe blade. This blade is in dark bluish gray. The final weapon takes some assembly. It is a double headed axe. There is a reddish brown bar that is four studs long. On top of this is a modified bar/hilt that is “T” shaped. Finally, there are two dark purple axe blades. They are both long and serrated.

Start by having two opponents in a ring. Each opponent will have a total of three weapons. The objective is to knock off your enemy from their spinner. If you do so, take their weapon. When you have all three of their weapons you win.

You may also play battle cards to change up the game. The cards will describe how they function and give you a general idea when to play them. For the full rules check out Rules for the LEGO Ninjago: Masters of Spinjitzu Spinner Game. That article will go over the full tournament rules of the Ninjago Spinner Game.

Extra Elements in the Set

In order to accomplish the things built in one of the cards, you get a few extra parts. There is a light bluish gray two-by-two round brick with vertical textured lines. There are four half pins in blue. There are three small black chains. You also get two slopes that are two-by-one-by two in dark brown and three cheese wedge slopes in reddish brown.

Game Options: 4 out of 4 Studs. There are not that many short minifigure options for the spinner game. This gives you one more.

Worth the Price: 4 out of 5 Studs. This set has some fairly uncommon elements in colors not normally seen. Most people just expect to get the minifigure.

Overall Rating: 4 out of 5 Studs. There is a great selection of elements and minifigure given the cost.